On Thursday, October 15, 2020, the White House released a national strategy to ensure that the United States remains a global leader in developing critical and emerging technologies (C&ET). The document lays out high-level goals to promote the “national security innovation base” and protect the United States’ technology advantage. The strategy builds on existing government efforts, including a recent report by the National Security Commission on Artificial Intelligence, and may impact ongoing federal work like the Commerce Department’s implementation of the Export Control Reform Act, which requires it to identify “emerging” and “foundational” technologies and consider additional export controls. It does not signal a significant change of direction from the White House but confirms sustained federal focus on U.S. competitiveness in important technology areas. As discussed below, clients should expect the federal government to employ a variety of existing regulatory regimes to promote domestic innovation and protect these technologies.

The Strategy notes that “American leadership in [science and technology] faces growing challenges from strategic competitors, who recognize the benefits of S&T and are organizing massive human and capital resources on a national scale to take the lead in areas with long-term consequences.” The strategy identifies two pillars of success:

Among calls for the National Security Council to identify critical and emerging technologies, the strategy emphasizes the role of the private sector. Calling out China and Russia, the strategy states that “[o]ur market-oriented approach will allow us to prevail against state-directed models that produce waste and disincentivize innovation, but we will also protect ourselves from unfair competition and prevent the use of our technology for authoritarian activities.”

It also calls for cooperation with like-minded allies and partners, emphasizing that the “United States will work with its allies and partners to advance C&ET based on a foundation of mutual benefit, teamwork, security, and proportional investment.”

In order to promote the “national security innovation base,” or the “American network of knowledge, capabilities, and people,” the document notes the importance of long-term investment in STEM education, workforce development, early stage research and development, “innovation-friendly” regulations, and cooperation among public and private entities as well as academia. Accordingly, the administration will advance policies that seek to lead the development of worldwide technology norms and standards, increase government budgets for R&D, and reduce burdensome regulations that inhibit innovation and growth.

These themes echo recommendations made by the private sector to the government to develop and sustain technology leadership, from 5G to AI and beyond. As a major North American standards group told the government about implementation of a 5G strategy, “the U.S. Government should work with industry to collaborate on a holistic approach that extends from pre-competitive research to full commercialization of new generations of wireless technology.”

Among “priority actions” identified by the strategy are several that may inform federal regulation and activity.

The strategy says that “[s]trategic competitors, such as [China] and Russia, have adopted deliberate whole-of-government C&ET efforts and are making large and strategic investments to take the lead. As a result, America’s lead in certain C&ET sectors is declining. The United States will take meaningful action to reverse this trend.”

The strategy signaled that the administration will continue its tough stance with respect to China, noting that the “United States does not tolerate intellectual property theft, the exploitation of open scientific norms, or economic aggression regarding C&ET.” To protect the U.S. technology advantage, the administration will pursue policies such as requiring security design early in technological development, strengthening security among academic institutions, encouraging allies to develop their own institutions similar to CFIUS, protecting supply chains, and working with the private sector to understand vulnerabilities.

The White House included an annex listing 20 broad technology areas as U.S. government priorities. The National Security Council will update this “Critical and Emerging Technologies List” annually. These broad categories suggest potential federal government interest in and regulation in an array of technology sectors, from AI to biotech to data science, quantum computing, and space. 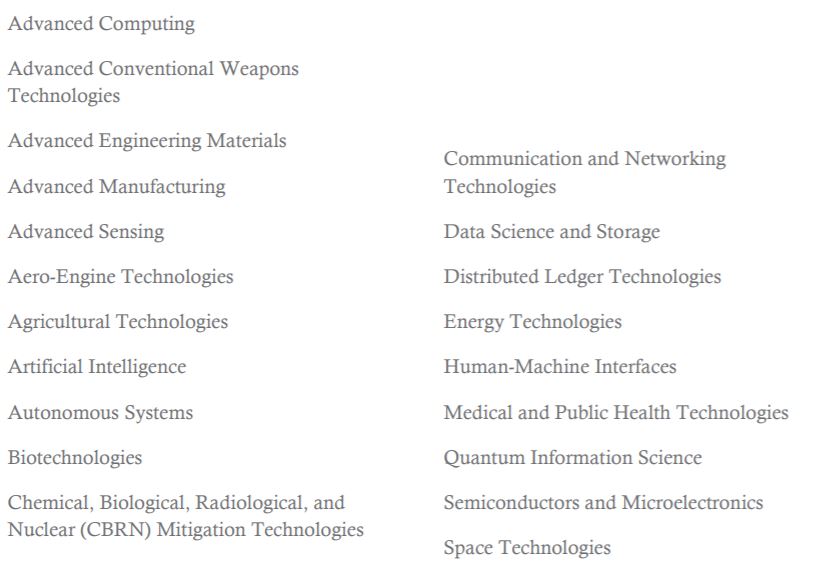 This list may inform the Commerce Department’s efforts to implement the Export Control Reform Act (ECRA), which requires it to identify “emerging” and “foundational” technologies. Commerce’s BIS has published two Advance Notices of Proposed Rulemaking (ANPRM) seeking comments on the definition of and criteria for identifying “foundational technologies” earlier this year, and “emerging technologies” in 2018, but has yet to propose and finalize any overarching rules. Several technologies that appear in the Critical and Emerging Technologies List appear as areas of concern in the ANPRMs.

Under its ECRA authority, Commerce has imposed 37 new controls on specific emerging technologies, largely to implement U.S. commitments under the Wassenaar Arrangement and other international agreements. These technologies include post-quantum cryptography, geospatial imagery software, certain surveillance software, and a number of chemical weapons precursors.

The Executive Branch has been putting out strategies and approaches to technology from 5G to AI and beyond. Some of these portend future regulation, while others suggest higher risk related to investments and innovation.

Wiley is at the forefront of federal activity on emerging technologies and innovation policies, as well as government review of foreign direct investment in the United States, and review of partnerships and global investments. Our Telecom, Media & Technology (TMT), International Trade, and National Security Practices help companies and industries work with the government and anticipate federal scrutiny and regulation.

Nicole Hager, a Law Clerk at Wiley Rein LLP, contributed to this alert.