Despite the deep partisan divides that exist in Washington, there is one issue that both parties seem to agree on: strengthening “Buy American” preferences when using government funds. As we previously reported in client alerts, a series of Executive Orders (EOs) issued by both the Trump and Biden Administrations have resulted in significant changes to long-standing rules implementing the Buy American Act (BAA) preferences applicable to government procurements. Continuing this trend, the Bipartisan Infrastructure Law enacted by Congress in late 2021 mandates additional changes to the BAA rules affecting government contracts, as well as additional changes to the patchwork of “Buy America” rules that apply to federal infrastructure projects—including an expansion of Buy America preferences to a broad array of “construction materials” used in federal infrastructure projects.

These changes could have significant impacts on government contractors as well as suppliers on federally funded infrastructure projects, who may need to re-examine their supply chains to ensure compliance with these evolving rules and standards. To help make sense of these changes, this article provides a summary of the most recent changes in these long-standing rules, and also previews the potential changes that are likely to come as these Buy American EOs and legislation continue to be implemented.

The BAA, which has been in effect since 1933, encourages the U.S. Government’s purchase of American-made products by setting a price preference for offers of domestic end products. In general, to be considered a “domestic end product” for purposes of the BAA, a manufactured end product needs to meet two conditions: (1) the article must be manufactured in the United States and (2) the cost of domestic components must exceed a certain threshold. 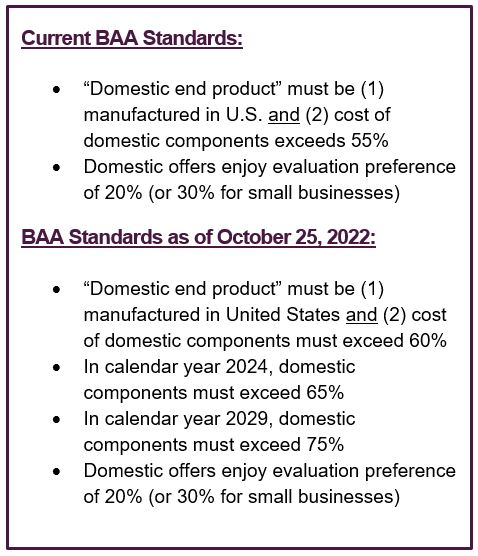 Following these changes to BAA rules, President Biden issued an EO that, among others, called for additional increases in the domestic content threshold. In March 2022, the FAR Council issued a final rule increasing the domestic content threshold from 55% to 60%, effective starting in October 2022. In addition, the final FAR rule calls for additional increases beginning in calendar year 2024, when the domestic content requirement will increase to 65%, ultimately increasing to 75% in calendar year 2029. Contractors will be required to comply with the threshold in effect in the year of delivery, although agencies can apply the threshold in effect at the time of contract award for the entire period of performance with approval by the senior procurement executive. The final rule also creates a fallback threshold to allow the use of the 55% threshold for products that are unavailable or are an unreasonable cost. This threshold is available only until calendar year 2030 and offerors must indicate that they are relying on the fallback threshold.

Building on these changes, the Bipartisan Infrastructure Law enacted in late 2021 codifies the increased domestic content thresholds mandated by the Trump and Biden EOs. In addition, the Bipartisan Legislation calls for additional changes to the BAA, including:

In addition to the changes made to the BAA rules governing federal procurements, the Bipartisan Infrastructure Law calls for additional changes to be made in the separate set of “Buy America” rules that apply to federally funded infrastructure projects. While the federal procurements are governed by a single set of Buy American rules based on the BAA and its implementing FAR provisions, federally funded infrastructure projects are subject to a variety of different “Buy America” restrictions specific to each infrastructure program (e.g., Federal Highway Administration (FHWA), the Federal Transit Administration (FTA), etc.). In general, the Buy America rules require steel, iron, and manufactured products used in such projects to be produced in the United States.

Consistent with existing Buy America rules, the Build America, Buy America Act allows for waivers based on “public interest,” non-availability, and unreasonable cost. Before issuing a waiver, however, the Act directs that head of the Federal agency must publish a detailed written explanation for the proposed determination to issue the waiver, and provide a period of not less than 15 days for public comment on the proposed waiver.

These continued changes to the Buy American and Buy America rules could have significant impacts for federal contractors as well as suppliers on federally funded infrastructure projects. Wiley is continuing to track these changes, so look to this space for further updates as these changes continue to be implemented through the rulemaking process.