Manufacturers, importers, and processors now have until August 5, 2019 to correct errors in the inactive list before it becomes illegal to manufacture or import those chemicals without advance notification.

On February 19, 2019, the Environmental Protection Agency (EPA) announced the release of the official Active/Inactive Update of the Toxic Substances Control Act (TSCA) Inventory. For the first time, the TSCA Inventory transparently shows which industrial chemicals on the list were manufactured, imported, and processed in the United States (U.S.) between June 21, 2006 and June 21, 2016. Of the 86,224 substances on the TSCA Inventory, companies reported 40,655 of them as commercially active for this period. Of these, 7,757 chemicals are listed on the confidential portion of the TSCA Inventory. The February 2019 update to the TSCA Inventory includes a new commercial activity status field designating which chemical substances are “active” in U.S. commerce. The updated Inventory reflects the following submissions:

More recently, on May 6 EPA issued a memorandum to announce that the substances that were not supported by industry during the Reset reporting period will be designated as inactive effective 90 days from the date of the memorandum.

The May 6 memorandum completes a commitment EPA made in the preamble to the final rule to issue the updated Inventory with an accompanying memorandum to clearly designate which substances are inactive and the date on which the prospective reporting requirement in the rule begins. 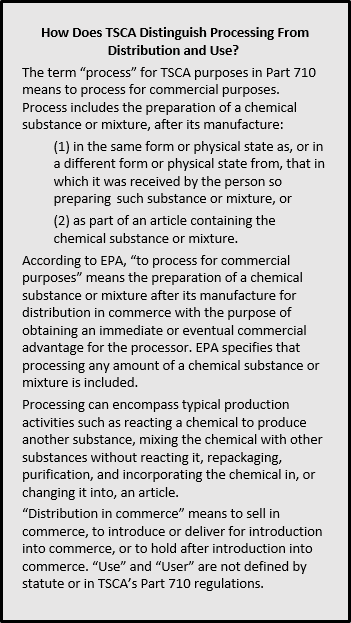 Starting August 5, 2019, manufacturers and processors will be required to notify EPA before reintroducing into commerce a substance currently identified as inactive on the TSCA Inventory. The rules for making these filings are in the EPA’s regulations at 40 C.F.R. Part 710. The May 6th announcement effectively gives companies until that same date to correct errors or to change the status of a chemical from inactive to active if they anticipate manufacturing, importing or processing the substance for the first time in the next 90 days.

To correct errors, manufacturers, importers, and processors can notify EPA by filing a Notice of Activity (NOA) Form B. After August 5, it will be a violation to manufacture, import, or process an inactive substance that is on the Inventory without first notifying EPA using the NOA Form B within 90 days before manufacturing, importing or processing. The information that must be reported on NOA Form B is 1) company name; 2) company address; 3) authorized official; 4) technical contact; and 5) chemical information (CAS Number and name or the TSCA Accession Number and a generic name for confidential substances). Reports must be filed electronically through EPA’s Central Data Exchange (CDX).

One group of chemicals that is most likely to have TSCA Inventory errors are those manufactured, imported or processed for the first time during the last two and a half years while EPA transitioned from the old TSCA Inventory to the Updated TSCA Inventory (e.g., between June 22, 2016 to now). Other chemicals may have inadvertently not been reported for other reasons last year.

The Inventory Reset gives us a more accurate picture of the chemicals in U.S. commerce than we had previously. At the same time, it signals new responsibilities for downstream companies under TSCA. Domestic processors who do not import the chemical but simply source it here can be held responsible for this aspect of a chemical’s Inventory status. Unlike with manufacturers, retrospective reporting by processors was voluntary during “Inventory Reset”. That is not the case going forward. Companies that want to process a chemical designated as “inactive” on the TSCA Inventory will have to file an NOA Form B or receive assurance from their supplier that this report was filed by them (manufacturers and importers also are obligated to file forward-looking reports for an inactive substance for which they plan to initiate commercial activity).

EPA’s current penalty policy for Section 8 of TSCA of does not address the new reporting requirement, and it remains to be seen if EPA will consider a failure to timely submit a report as simply a one-time paperwork reporting obligation. In the alternative, EPA could view the failure to report as on-going and more serious in nature, similar to the failure to file a premanufacture notification, if the failure to report were shown to interfere with the agency’s mandate to review existing chemicals.

All in all, the Inventory Reset exercise has resulted in significant changes to TSCA. It has always been a violation of TSCA to manufacture or import a non-exempt substance that is not on the TSCA Inventory, but just being on the Inventory is no longer good enough. To check the new TSCA Inventory for the active or inactive status of your chemicals, particularly while you have the opportunity over the next three months to fix any mistakes, click on the link here.