On March 11, 2022, President Biden called on Congress to revoke permanent normal trade relations (PNTR) with Russia. In a fact sheet regarding actions being taken simultaneously with the European Union and Group of Seven (G7) nations, the Administration explained that PNTR revocation and related efforts will “hold Putin accountable for his continued assault on Ukraine and further isolate Russia from the global financial system.”

Revocation of Russia’s PNTR status will likely have significant effects for trade in goods from Russia. The Biden Administration has already announced import bans affecting certain Russian energy products, as well as seafood, alcohol, and non-industrial diamonds. The Administration has also banned the exportation of “luxury” goods to Russia and Belarus, including certain jewelry, tobacco products, vehicles, and clothing.

If Russia’s PNTR status is revoked, Russian commodity and industrial goods imported for consumption into the United States will be subject to the “Column 2” rates of duty enumerated in the Harmonized Tariff Schedule of the United States (HTSUS), instead of the “Column 1” normal trade relations rates, which are most favored nation (MFN) rates for WTO purposes.

The “Column 2” rates of duty are often higher (sometimes significantly higher) than the “Column 1” MFN rates, and will certainly affect the $29.7 billion annual trade in goods imported from Russia to the United States. While the "Column 2" rates are not prohibitively high for some commonly imported Russian goods, such as oil and petroleum products and certain seafood, as noted above, the Biden Administration banned imports of Russian oil/petroleum products and seafood in separate actions announced on March 8, 2022 and March 11, 2022.

Wiley has analyzed the duty effects of revocation Russia’s PNTR status on some of the largest categories of Russian imports into the United States. 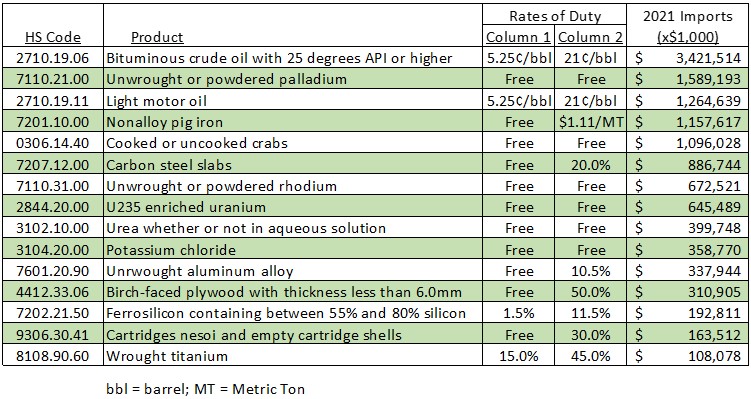 As noted above, part from the duty implications, the White House has announced outright bans of the importation and exportation of certain classes of goods. With respect to the import bans on Russian energy products, and Russian seafood, alcohol, and non-industrial diamonds, the U.S. Office of Foreign Assets Control (OFAC) has issued general licenses permitting imports for a limited time of products for which written contracts were in place prior to the announcement of the import bans.

Because Congress administers the tariff laws, President Biden cannot himself revoke PNTR, which is why he has asked Congress to take such action. Revocation legislation appears to have bipartisan support in the House and Senate.

Companies that source goods from Russia or plan to do so will need to carefully assess the duty implications of potential revocation of Russia’s PNTR status when assessing supply chain options. If Russia's PNTR is revoked, customshouse brokers that facilitate entries of goods from Russia will also need to ensure that proper duties are tendered on entries of goods from Russia, that the proper tariff classification is assigned to Russian-origin goods, and that requirements are adhered to with respect to proper bonding amounts.