In a flurry of enforcement activity aimed at stopping illegal robocalls, three federal agencies have initiated separate but coordinated actions into the role of Voice over Internet Protocol (VoIP) providers. Specifically, in December and January, respectively, the Federal Trade Commission (FTC) and the U.S. Department of Justice (DOJ) initiated first-of-their-kind enforcement actions against U.S.-based VoIP providers. In late January, the FTC continued its efforts by sending warning letters to 19 VoIP providers. Most recently, in early February, the Federal Communications Commission’s (FCC) Enforcement Bureau sent letters to seven VoIP providers. Together, these actions represent a “coordinated effort” between the DOJ, FCC, and FTC and indicate that federal government enforcement agencies are placing increased attention on the role of VoIP providers in combatting illegal robocalls.

While the separate actions announced by the DOJ, FCC, and FTC vary in approach, as described in detail below, each specifically targets VoIP providers acting as so-called “gateways.” Although illegal robocalls often originate from overseas, such calls must at some point enter the domestic telephony network through a gateway (i.e., U.S.-based) provider.

To illustrate the importance of the “gateway” role, the DOJ accompanied its actions with the graphic shown below.  And in each of its seven letters, the FCC’s Enforcement Bureau noted that “as the point of entry for this traffic into the U.S. telephone network,” the VoIP providers were “uniquely situated to assist government and industry efforts to combat apparently illegal robocalls,” alleging that the seven VoIP providers targeted in the letters were “being used as a gateway into the United States for many apparently illegal robocalls that originate overseas.” 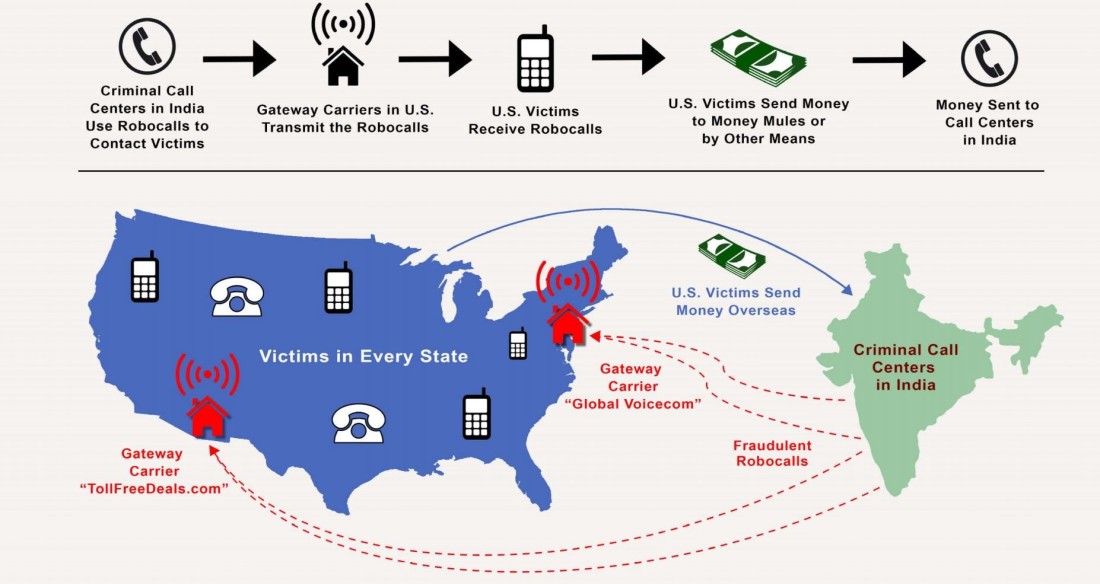 In short, federal agencies, which have traditionally focused on enforcements against illegal call originators, now appear to be targeting a select group of VoIP providers that allegedly actively participated in the schemes to fuel illegal calls. The role of these providers in the illegal robocalling ecosystem has certainly been on everyone’s radar for some time. Indeed, as we noted last year, Adrian Abramovich – a call originator who was fined $240 million by the FCC for robocall violations – highlighted in congressional testimony that there are a small group of VoIP providers that actively solicit customers for “short duration calls” and are willing to accept “all the calls you can throw at them.” He further emphasized that this handful of companies are “fueling” illegal robocall traffic, and are critical to the proliferation of such calls. What is new is federal enforcers taking note and action.

The first agency to take action targeting “gateway” VoIP providers was the FTC. Late last year, that agency targeted VoIP provider Globex Telecom, Inc. (“Globex”) for alleged violations under the Telemarketing Sales Rule (TSR), which prohibits a variety of deceptive practices in the sale of goods or services or the solicitation of charitable contributions over the telephone. The FTC, together with Ohio Attorney General (AG), eventually secured a temporary restraining order (TRO) against Globex for “assisting and facilitating” an alleged debt-reduction scam perpetrated by one of its customers.

The case is notable because it represents the FTC’s first-ever enforcement action against a VoIP provider. Importantly, the FTC and Ohio AG described Globex as an interconnected VoIP service provider that “provides information services pursuant to 47 U.S.C. § 153 of the Communications Act of 1934, as amended.” The distinction is important, given that the FTC Act gives the agency enforcement authority over “unfair or deceptive acts or practices,” but exempts “common carriers subject to the Acts to regulate commerce.” 15 U.S.C § 45(a)(1), (2). As such, the FTC is generally prohibited from pursuing traditional voice services providers who are regulated by the FCC as “telecommunications services.” Interconnected VoIP providers such as Globex, however, operate in a regulatory gray area. The FCC has declined to classify interconnected VoIP providers as either an information service not subject to common carrier regulations, or a telecommunications service subject to such regulations. Moreover, several courts, including the U.S. Court of Appeals for the Eighth Circuit, have concluded that VoIP providers such as Globex are information services.

In addition to its litigation against Globex, the FTC also signaled its increased focus on VoIP providers acting as gateways with a series of letters sent in late January to 19 unidentified providers warning them that “assisting and facilitating” illegal telemarketing or robocalling is against the law. Andrew Smith, Director of the FTC’s Bureau of Consumer Protection, said the warning letters “put VoIP providers on notice that we will take action when they knowingly facilitate illegal robocalls.” The letters warned each recipient that the FTC may take legal action against them if they assist a seller or telemarketer who they know, or consciously avoid knowing, is violating the agency’s TSR; the letters also specifically reference the FTC’s case against Globex, as well as recent DOJ actions, discussed below.

The DOJ’s separate civil complaints against TollFreeDeals and Global Voicecom contain similar allegations to those in the FTC’s Globex action. In each of its cases, the DOJ sought and the court has now entered a TRO to immediately halt the defendants’ alleged transmission of unlawful robocall traffic, alleging that call centers based out of India used the defendants’ VoIP services to pass fraudulent government- and business-imposter fraud robocalls to American victims. The robocalls claimed to be from the Internal Revenue Service and the Social Security Administration, as well as several well-known brands.

The DOJ specifically alleges that both defendants served as “gateway” providers for the fraudulent robocalls, and “knowingly” introduced fraudulent robocalls into the domestic telephony network, in violation of the Wire Fraud Act. For example, the complaint against TollFreeDeals alleges that during a sample 23-day period the defendants carried more than 720 million robocalls.  Noting that more than 425 million of those calls lasted less than one second, the DOJ stated that “high volumes of short-duration and unanswered calls are indicative of robocalls.”

The DOJ also alleges that the defendants ignored repeated red flags and warnings about the nature of the calls they were carrying. For example, both complaints make repeated reference to several inquiries from the Industry Traceback Group (ITG) managed by USTelecom, and downstream providers receiving the defendants’ traffic. In the case of TollFreeDeals, the DOJ alleges that the company received 144 notifications from the ITG between May 2019 and January 2020 regarding suspected fraudulent traffic.

Most recently, the FCC has also engaged with several VoIP gateway providers, albeit without initiating formal enforcement actions. Specifically, in early February, the FCC’s Enforcement Bureau sent letters to seven gateway service providers asking for their support in tracking down the originators of illegal spoofed foreign robocalls. The letters also direct each of the providers to submit a “detailed response” to a series of questions from the Enforcement Bureau no later than February 17.

Among other things, the Enforcement Bureau seeks information from each of the providers regarding the processes they use to detect or identify suspected illegal traffic; the percentage of each company’s traffic from “foreign sources”; actions companies have taken to terminate or restrict suspected illegal traffic; and whether their services are advertised in foreign countries. The letters are similar to ones sent by the Enforcement Bureau to various providers in November 2018.

Finally, the FCC notes in its press release and each of the letters that the agency will soon be proposing new rules to establish a registration process for selecting a consortium to conduct private-led efforts to trace back the origin of suspected unlawful robocalls. The proposed rules would implement a provision of the recently enacted Telephone Robocall Abuse Criminal Enforcement and Deterrence Act (TRACED Act).

It is clear that federal agencies have started the new year with a keen focus on illegal robocall enforcement, and will continue to focus on addressing the illegal robocall problem through various approaches. In addition to the multitude of proceedings and initiatives required under the TRACED Act, the recent coordinated enforcement efforts by federal agencies suggest that the operational tempo in this area is poised to increase.

Wiley has a deep and experienced bench of lawyers who handle robocalling and robotexting issues for clients. Our experts handle federal and state policy issues; compliance with federal and state requirements; complex Telephone Consumer Protection Act (TCPA) issues, including political and charitable outreach; and TCPA enforcement actions and investigations.