The Committee on Foreign Investment in the United States (CFIUS)[1] recently released its Annual Report to Congress for calendar year 2013. The report provides valuable information to foreign and U.S. companies on CFIUS' reviews of foreign investments in the United States that may raise national security concerns.  As was the case in 2012, the report revealed that foreign investments in U.S. companies, which have fallen since last year, continue to face heightened levels of scrutiny by CFIUS-nearly half of all CFIUS filings were subject to the inter-agency committee's 45-day investigation period.  In addition, the report noted that the U.S. Intelligence Community believes, as it did in 2011, that there may be a coordinated strategy among foreign governments or companies to acquire critical American technology research, development, and/or production know-how.

Key Highlights of the 2013 Report

Mitigation Agreements Increased
In 2013, 11 cases (or slightly more than 11 percent) resulted in legally binding mitigation measures, up from the eight such cases in 2012.  Mitigation agreements, which place conditions on the transactions, were put in place for transactions involving investments in the telecommunications, software, mining, oil and gas, manufacturing, consulting, and technology sectors.

Withdrawals Significantly Declined
In 2013, there were only eight withdrawals from the CFIUS review process; three occurred during the 30-day review process and five during the 45-day investigation period.  This is significantly lower than in 2012, when two notices were withdrawn at the review stage and 20 at the investigation stage.  In 2013, only one of the withdrawn notices was refiled.[4]  Parties to the remaining transactions may have abandoned their attempted investments for commercial reasons or due to an inability to mitigate the national security concerns raised by CFIUS.

No Presidential Veto
Unlike in 2012, none of the investigations resulted in a Presidential decision in 2013.  As you may recall, in 2012, for the first time since 1990, the President issued an executive order prohibiting foreign investment by a foreign entity for reasons of national security.[5]

China Led CFIUS Filings, Followed by Japan, Canada, France, and the United Kingdom
As was the case last year, Chinese investors overtook investors from all other countries with the highest number of filings in 2013-21.  Japan came in second at 18 transactions, double the number of transactions from 2012.  The number of transactions involving Canadian companies remained relatively steady at 12 (down slightly from 13 in 2012). Likely as a result of slower EU growth, investments from France and the U.K. have slowed since 2011, with French companies at 7 transactions in 2013 (down from 14 in 2011), and filings from U.K. companies falling steadily over the last three years, from 25 in 2011 to 17 in 2012 to only seven in 2013.

General Economic Trends
As evidence of the continuing state of recovery from the financial crisis that began in 2008, CFIUS filings during the 2010 to 2012 period appear to coincide with improvements in the U.S. market.  Although CFIUS notice levels have yet to return to the pre-financial crisis high of 155 notices, the growing number of notices are indicative of the increase in foreign investment in the United States, with CFIUS filings rising steadily from 65 in 2009, to 93 in 2010, to 111 in 2011, to 114 in 2012.  Although the number of CFIUS filings fell in 2013, filings in 2014 are expected to be well above the 2013 figure.

Information on Covered Transactions by Country[6]
Companies from over 30 countries filed CFIUS notices over the last three years, with 26 countries represented in 2013.  From 2011 to 2013, companies in China filed 54 notices, accounting for almost 17% of all CFIUS filings, the highest of any country.  The United Kingdom had 49 filings, followed by Canada and Japan with 34, France with 29, and the Netherlands with 14.

Information on Covered Transactions by Business Sector
CFIUS reviews covered foreign investments in a wide range of sectors, and reviews are not necessarily concentrated in transactions involving defense or other traditional national-security related sectors.  In 2013, approximately 35% of all investments came in the manufacturing sector, 33% were in the finance, information, and services sector, 21% were in the mining, utilities, and construction sectors, and 10% were in the wholesale and retail trade sector.  During the three-year period from 2011 to 2013, 35% of CFIUS notices filed within the manufacturing sector involved transactions within the computer and electronic products subsector, while 47% of transactions within the finance, information, and services sector involved professional, scientific, and technical services.

Source: Committee on Foreign Investment in the United States, Annual Report to Congress at 3 (Feb. 2015). 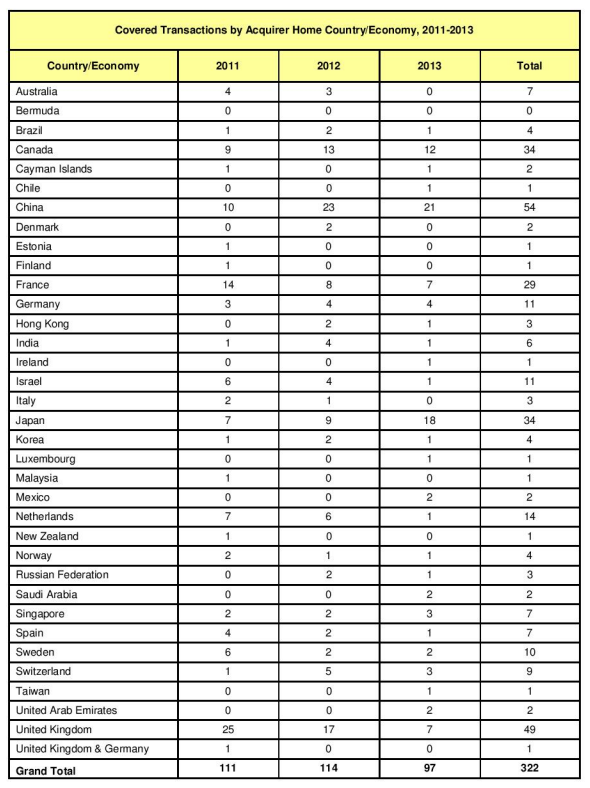 Source: Committee on Foreign Investment in the United States, Annual Report to Congress at 17 (Feb. 2015).

Wiley Rein has an unparalleled ability to assist U.S. and foreign companies before CFIUS.  Partner Daniel B. Pickard is a CFIUS expert and provides comprehensive guidance on multiple trade and investment issues including compliance with the National Industrial Security Program (NISP) and on Foreign Ownership, Control or Influence issues.  Nova J. Daly served as a Deputy Assistant Secretary for Investment, Security, and Policy at the U.S. Department of Treasury.  In that capacity, he ran the CFIUS process, oversaw over 350 cases, negotiated the new CFIUS law, and was responsible for the drafting and implementation of the new CFIUS regulations.

Wiley Rein's CFIUS practice is bolstered by the broad and diverse strength of professionals in the firm's other areas of specialty, including: Government Contracts, Export Controls, Cybersecurity, Economic Sanctions/Office of Foreign Assets Control, Foreign Corrupt Practices Act (FCPA), and Corporate, and is further strengthened by a host of specialized practice experience in defense, telecommunications, aviation, satellite technology, and other sectors.

[3]               Five cases proceeded to the 45-day investigation period as a result of the temporary suspension of government operations in October 2013.  Without these five cases, the percentage of notices that proceeded into the investigation stage is 44%.