Since March, at least three Telephone Consumer Protection Act (TCPA) lawsuits have been filed against political campaigns, and the stakes are very high. The TCPA is a federal law that creates “clear limits” around automated calls and texts for political campaigns and other organizations—including PACs, Super PACs, trade associations, and 501(c)(4)s. The law creates statutory damages of $500-$1500 per call or text, a dollar amount that can quickly add up in class actions, which are the types of suits that recently have been filed against political campaigns.

First, on March 3, 2016, a plaintiff filed a class action complaint against a candidate for Commissioner of Metropolitan Water Reclamation District of Greater Chicago—Andrew Seo. The suit alleges that the Seo campaign placed prerecorded voice calls—commonly known as robocalls—to the plaintiff’s cell phone without prior express consent.

The second and third suits (filed only a day apart from each other) are against Donald J. Trump for President, Inc. Both plaintiffs filed class actions for allegedly unauthorized text messages sent by the Trump campaign to their wireless numbers. In one Trump suit, filed April 25, 2016, the plaintiff claims that using autodialer equipment, the Trump campaign sent the following text message to thousands of cell phone numbers: 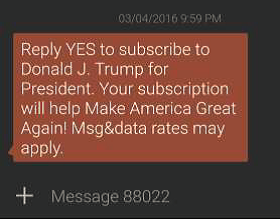 The plaintiff alleges that he never voluntarily provided his phone number to the Trump campaign, and that the campaign did not have the prior express consent required to send such a text. In the second claim against Trump, filed on April 26, 2016, a similar text message is at issue. There, however, the plaintiff provided his number to Event Brite in order to obtain a ticket to a Trump rally. That plaintiff filed suit on behalf of the following class:

Every person: (1) to whom, from June 2015 to the filing of this action, defendant Donald J. Trump For President, Inc. (the “Trump Committee”) sent a non-emergency telephone SMS message to the person’s cellular telephone through the use of an automatic dialing system; (2) who provided his or her cellular telephone number to Event Brite to obtain a ticket to attend a Trump-related event; and (3) did not provide express consent to the Trump Committee to send an SMS message regarding Donald J. Trump’s political campaign for President.

While the outcomes of all of these cases are yet-to-be-known, as they must make their way through the federal court system, there is still a lesson to be learned from them. These cases show a growing trend to target political campaigns for calling and texting practices, and should serve to put all political campaigns engaging in voter, donor, or other outreach via automated phone calls or texts on notice. And not just political campaigns should be paying attention. Other organizations, such as nonprofits engaging in grassroots lobbying or Super PACs, may be caught by the rule, as well.

Before making automated calls or texts, including using an autodialer or a third party vendor, know the risks and know the rules. This includes federal law as well as state rules. The combination of Wiley Rein’s preeminent election law practice group with its legendary communications practice group can help you navigate this minefield.