The Senate Armed Services Committee (SASC) renewed its battle against the bid protest process in the 2017 National Defense Authorization Act (S. 2943, Section 821). For years, factions within the Senate have questioned whether increases in the number of bid protests filed with the Government Accountability Office (GAO) have resulted in unnecessary delays or costs to the DOD acquisition process, and advocated for reforms that would shield DOD acquisitions from protest. The latest attempt would erode a pillar of oversight that has long been a key to maintaining a credible, transparent and competitive acquisition system.

As outlined in its proposed 2017 NDAA, the Committee proposes two significant “reforms” to the GAO’s bid protest procedures that would penalize unsuccessful protests. The first would affect large defense contractors with “revenues in excess of $100,000,000 during the previous year,” and require them to pay GAO’s “costs incurred for processing a protest” if the contractor files a protest that GAO denies. The second would affect “incumbent contractors” who file a bid protest related to a follow-on contract and receive a temporary bridge contract or extension for the work “as a result of a delay in award” due to the protest. In those cases, the Committee proposes to impound the protesting contractor’s profits for the bridge/extension (i.e., “all payments above incurred costs”), and dole them out to the awardee or GAO unless GAO issues a decision sustaining the protest.  These proposed “reforms” are intended to chill defense contractors’ interest or willingness to pursue bid protests at GAO by increasing both the cost and business risk of filing an unsuccessful protest.

As discussed below, industry should resist these changes, not only because they are poorly conceived and impractical to implement, but because in the long run they would undermine the integrity of the procurement process. The Committee’s concerns do not appear to be based yet on any evidence that DOD has experienced an increase in unwarranted protests by large defense contractors or incumbent contractors, or that the protest process is unduly interfering with DOD’s acquisition process. Indeed, in a classic case of “shoot first, ask questions later,” the Senate’s proposed 2017 NDAA elsewhere calls for a report on bid protest statistics and analysis, to provide insights on the impact of bid protests on the DOD acquisition process; the House Committee on Armed Services Report (H.R. 4909) joined a similar reporting requirement.

In recent years, the SASC targeted the GAO bid protest process based on its perception that protests inject unwarranted cost and schedule delays into DOD’s acquisition process.This echoes the drumbeat from the 2009 NDAA, in which Congress directed GAO to undertake a five-year review of protests involving the DOD. That report (B-401197, April 9, 2009) noted the inherent “balancing act” between ensuring that procurements can proceed without undue disruption, while also providing a mechanism for transparency and accountability. At the time, GAO highlighted that it consistently closed more than half of all DOD-related protests within 30 days, and 100% of all protests (per its statutory mandate) in less than 100 days. It noted that GAO received less than two protests each year per $1 billion in DOD spending, and the five-year trend was downward.

More recent statistics continue to belie the Committee’s and DOD’s anecdotal concern that bid protests inject unwarranted disruption. GAO still resolves protests involving DOD quickly—our analysis shows that GAO has disposed of more than 50% of DOD protests filed since 2014 within 30 days or less, just as it did in 2003-2008. GAO’s bid protest statistics show that in 2015 (the most recent full year for which GAO reported data to Congress), GAO issued decisions sustaining a protest in only 12% of the protests in which it issued a formal decision on the merits, its lowest rate in more than 15 years. But the more relevant statistic for any discussion of the institutional benefits of the protest process lies in GAO’s “Effectiveness Rate,” which measures the frequency with which a protester obtains some form of relief after filing a protest and accounts for protests in which an agency takes voluntary corrective action before GAO issues a formal decision. In 2015, GAO’s “Effectiveness Rate” was 45%—the highest rate since GAO began reporting effectiveness in 2001. That means that in nearly half of all protests, a protester achieved some form of relief from GAO or the agency. In fact, while the pace of protests has steadily increased in the last 15 years, the “Effectiveness Rate” has also steadily increased: 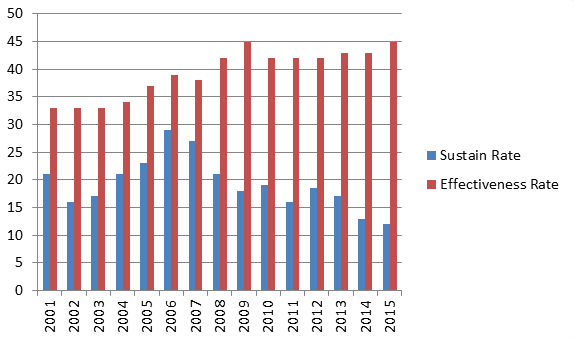 Percentage of protests resulting in some form of relief to protester, including voluntary corrective action (“Effectiveness Rate”) versus percentage of published decisions sustaining a protest (“Sustain Rate”), 2001-2015

What does this mean? If anything, the GAO bid protest process is more important now than ever to maintaining the integrity, transparency and openness of the federal procurement process, as protesters rely on GAO protests more frequently, but also more successfully, to ensure that source selections result in the right outcome.

And DOD agencies are hardly immune to these trends. For example, our analysis of decisions and outcomes from 2015 shows that the Air Force has a sustain rate that is approximately 50% higher than GAO’s average for all agencies, while the Army appears to have a materially higher-than-average rate of voluntary corrective action. So while the Committee is in a rush to curtail the GAO protest process, the data suggests that other efforts may be better suited to improving the overall integrity of the procurement process, such as strengthening the government’s acquisition workforce, encouraging more productive exchanges with industry before and during competitions, and improving transparency in the post-award debriefing process (which, if we are going to rely on anecdotal inferences, may be the single most effective way to reduce the prevalence of speculative protests).

At the end of the day, if DOD is concerned about potential program delays or increased costs that an unsuccessful GAO protest could cause, it already has two powerful tools to manage or eliminate those risks. First, DOD controls its acquisition timeline. The GAO protest process (and the attendant “automatic stay” of contract award/performance) is, at most, 100 days for an unsuccessful protest. DOD can eliminate any programmatic delays from non-meritorious protests simply by managing its acquisition cycle to include sufficient time to account for this process. Likewise, if an agency effectively manages its acquisition pipeline instead of waiting until the last minute before an incumbent contract expires to award the follow-on, it can mitigate or eliminate any financial opportunity an incumbent might be able to create by pursuing a protest to force a bridge contract or extension. Second, in cases where there are urgent or compelling circumstances, or it is in the government’s best interest, DOD has the authority under the Competition in Contracting Act to “override” the automatic stay and move on with contract performance. With these tools at hand, the argument in favor of the SASC’s proposed “reforms” further erodes.

The Proposed Reform Penalties Are Rife With Flaws

The last time GAO weighed in on potential bid protest reforms that featured “penalties” like the ones proposed by the Committee, it expressed significant concern that imposing penalties (including fines and cost-shifting provisions) to disincentivize protests could have serious negative consequences for contractors, GAO, and the procurement process. GAO’s report in 2009 highlighted the collateral benefits of a robust and uncompromised bid protest process that could be adversely affected by systematic penalties, including (i) the significant public benefits of a forum “to identify and pursue complaints concerning the procurement system”; (ii) the opportunity for indirect congressional oversight of the procurement process; and (iii) the element of transparency and accountability infused into the procurement system, including the opportunity to provide acquisition-related guidance to agencies in the form of publically available decisions that interpret procurement laws and regulations. All of those public policy concerns continue to weigh against the Committee’s proposed penalties.

The industry has already experienced the public policy growing pains that attend Congressional efforts to “streamline” the bid protest process or insulate procurements from review. After the Federal Acquisition Streamlining Act of 1994 (FASA) restricted task and delivery order protests, Congress grew wary of unintended consequences when agencies became too dependent on multiple award IDIQ contracts as a means to evade competition. In 2007, the Acquisition Advisory Panel chartered under the Services Acquisition Reform Act of 2003 (SARA) highlighted bid protest opportunities as an important check that favored competition and transparency, but that was lacking at the IDIQ order level and needed to be reinstated. A follow-up GAO report confirmed the competition shortfalls, noting that nearly half of all DOD IDIQ order awards it reviewed in one study were awarded without competition. Oversight Plan Needed to Help Implement Acquisition Advisory Panel Recommendations, GAO-08-160 (Dec. 2007). The FASA bid protest “reform” proved ill-fated, and by 2008 Congress was forced to pivot back.

Setting aside the policy debate about whether there is any need for bid protest “reform,” the SASC’s proposed statutory changes have shortcomings that would make them virtually impossible to implement. For example, neither proposed reform addresses the situation where there are multiple protesters, including what happens where GAO sustains protest arguments raised by one protester but not others. Likewise, the proposal to impound certain payments to an “incumbent” contractor for a bridge contract does not address the potential outcome where an agency takes voluntary corrective action in response to the incumbent’s protest—which as noted above happens with increasing frequency. And from a practical perspective, how would an agency be able to ever prospectively identify “all payments above incurred costs of a protesting incumbent contractor” so that it could be in a position to withhold them? As it stands now, actual “incurred” costs on any cost-reimbursable contract (including indirect cost allocations) may not be finalized for several years, as DCAA is routinely several years in arrears on any incurred cost audits. Fixed price contracts, on the other hand, do not require contractors to capture “incurred costs” at all, while paying something less than the negotiated “price” would be tantamount to a breach of contract. Regardless of contract type, the proposal to use Robin Hood tactics to take “profits” earned by one company but deliver them to the government or another contractor would be rife with due process and Fifth Amendment takings legality problems.

These concerns underscore the need for a more informed dialogue about the actual programmatic risks that DOD realistically faces in connection with the GAO bid protest process, and what options exist to meaningfully address any real risks, as opposed to perceived ones borne from anecdotal experiences that are not representative of systematic problems. The House and Senate’s proposed in-depth report on the impact of GAO and Court of Federal Claims bid protests is a constructive step in that direction. Perhaps better data will pave the way for analysis and constructive dialogue about what, if any, bid protest reforms are necessary to improve the integrity of DOD’s acquisition process. It might save us from fixing a problem that Congress may determine never existed.