NASA held its Unmanned Aircraft Systems (UAS) Traffic Management Convention, or UTM 2015, at Ames Research Center, Moffett Field, California from July 28-30, 2015.  Dr. Parimal Kopardekar, NASA Safe Autonomous System Operations Project Manager and UTM Principal Investigator, helped open the event by defining the goals of NASA and the conference. NASA is working hard, in collaboration with the private sector, to test and demonstrate UTM that accommodate all user interests in the low altitude airspace. Below is a short summary of the key developments at the event.

Airspace Design: The airspace would be segmented into four categories with the added feature of certain pre-defined risk locations. 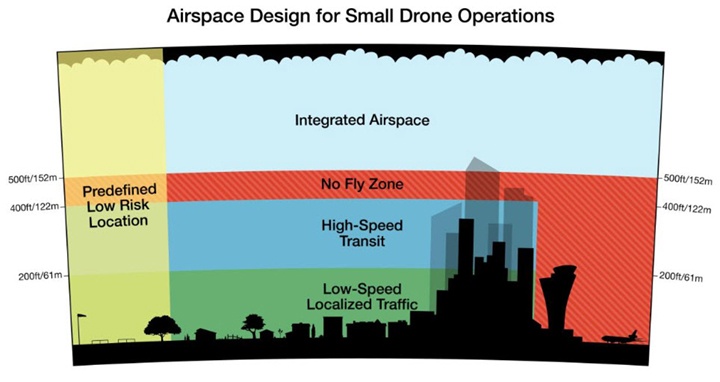 Amazon also offered the following description of the rules for each air space category:

Airspace Management and Operations. With respect to “airspace management and operations,” Amazon “believes that the current model of airspace management will not meet future sUAS demands, particularly highly-automated, low-altitude commercial operations.” While indicating that more research is needed, Gur Kimchi said that “it is Amazon’s position that the projected industry growth requires the delegation of responsibility for many traditional air navigation services, such as navigation and air control and communication. There should be a controlling entity that serves a central, offline coordination and auditing function, however many of these services will be handled in a more distributed and federated fashion where multiple operators cover overlapping areas, each managing their own fleet. These operators would coordinate by following established protocols, using vehicle-to-vehicle, vehicle-to-service, and service-to-service data communication and automation, to safely and efficiently manage the shared air space.”

John Leibovitz, Special Advisor to the Federal Communications Commission (FCC) Chairman for Spectrum Policy and Deputy Chief of the Wireless Telecommunications Bureau, began the round table by stating that the FCC has an open door to discuss UAS spectrum needs. He noted that the FCC does have some legacy technical issues relating to the use of commercial frequency bands aboard aircraft (citing the prohibition against cell phones on airplanes) but said that these should not be considered as “show stoppers.” Mr. Liebovitz raised the question of whether including UAS spectrum issues on the agenda of the agency’s Technical Advisory Committee might make sense.

Jim Williams, former head of the Federal Aviation Administration (FAA) UAS Integration Office, noted that there are distinctions between visual line-of-sight and radio transmission line-of-sight for command and control (C2) of UAS operations. The FAA is worried about radio transmission link loss in controlled airspace. He noted that the Radio Technical Commission for Aeronautics (RTCA) and FAA advisory committees are in the process of characterizing how the two spectrum bands allocated for UAS will be used. Jennifer Richter, on behalf of the Small UAV Coalition, stated that the two allocated bands were for larger UAS and higher altitude UAS – not for sUAS. Williams disagreed and said that the protected and allocated spectrum is not just for large UAS. Participants also noted that there are no standards today for C2.

The round table then shifted to a discussion of integrating UAS into FirstNet, the new nationwide public safety wireless broadband network. One participant asked what happens when cell phone networks are knocked out during hurricanes. While package delivery services might not be affected, the oil and gas pipeline inspections would be. This prompted questions about potential use of satellites during disasters.

John Leibovitz concluded the session by asking whether the UAS industry should be considered based on segments with different functional requirements. He said that “much here is reminiscent of what happened in the wireless industry” where both public networks and specialized private systems developed to serve different communications needs.

Dr. Ashok Srivastava, Verizon Chief Data Scientist started by addressing what role Verizon could play in UAS. He noted that the Internet of Things (IoT) is an emerging large scale market. Millions of devices already enable machines around the country. UAS are a different kind of machine because they fly. Verizon is trying to understand the network, cloud computing, and analytics that can produce safe operation. Dr. Srivastava also noted that security is part of a solution to the problem. He emphasized the need to make sure security is enabled in the vehicle and in the air. He also noted the need to address loss link situation. Safe operation requires the right level of automation on aircraft and network. He concluded by saying that verification and validation of flight critical situations is essential with regard to both equipment and human reactions.

Dave Vos, Project Lead for Google’s Project Wing, prepared a keynote addressing Google’s views on the technology needed to safely integrate UAS into the NAS. Google believes that UAS flying below 500 feet should be permitted to routinely operate in Class G airspace under existing rules and regulations applicable to manned aircraft. UAS would be required to perform collision avoidance with manned aircraft and other UAS through a lightweight location and intent transceiver similar to ADS-B. Mr. Vos stated that Google is developing an 'ultra low cost' device to serve this purpose. Airspace Service Providers (ASPs) would serve as an interface between UAS operators and Air Traffic Control, leveraging existing cellular networks, to enable coordinated flight planning between all UAS airspace participants. The ASPs would maintain a database of No-Fly-Zones, obstacles, weather alerts, etc. in order to establish real time geo-fences. Multiple ASPs would be permitted to exist provided they are networked together.

The panel on state and local perspectives had representatives from economic development offices for Georgia, Utah, Virginia, and New York. They were joined by the California Department of Transportation Chief. The key points from the panelists for the UAS industry were as follows:

John Kerczewski from NASA described the current efforts to explore C2 using terrestrial systems. NASA is looking at C2 in partnership with Rockwell Collins, using a prototype radio developed by Rockwell Collins. There have been 100 flight test radios to validate RTCA 228 standards and validation work on NASA simulation models. NASA is now conducting flight tests with integrated C2 and detect and avoid tests. A second phase of this work will focus on use of satellite systems for C2.

Dr. Gregory McNeal, AirMap Co-Founder, is building mapping information for the United States and worldwide. AirMap is including regulatory and local restrictions into its mapping system. The goal is to have an ability to control UAS routing to navigate around and between federal or state/local no fly zones and limitations. Its goal is to provide dynamic routing based on local requirements.

Jonathan Evans, Skyward CEO, expressed concerns about balkanization of the airspace. He described UAS as a network of flying cellphones instead of flying airplanes. He called for federated standards for air rights that define the points at which there is a nuisance. Evans assumed local restrictions will get tested and that we will have federal air rights at some point.