On February 15, 2015, the Federal Aviation Administration (FAA) released a Notice of Proposed Rulemaking (NPRM) on proposed rules to allow the operation of small unmanned aircraft systems (UAS) in the National Airspace System (NAS).  A small UAS consists of the aircraft itself (which, as defined by statute, weighs less than 55 pounds) and the equipment necessary for the safe and efficient operation of that aircraft.  On February 24, 2015, the NPRM was published in the Federal Register.  Comments are due on or before April 24, 2015.

Specifically, the FAA is proposing to add a new part 107 to Title 14 of the Code of Federal Regulations to allow for routine civil operation of small UAS in the NAS and to provide safety rules for those operations.

The major points of the proposed Part 107 rules are as follows. 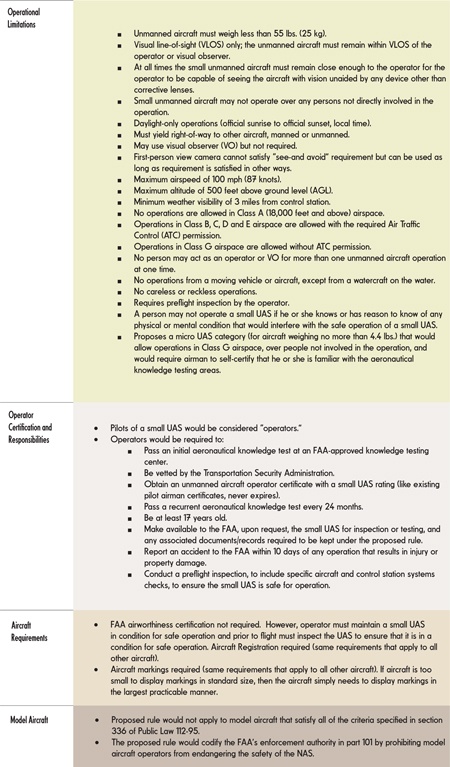 The NPRM addresses the operation, airman certification, and registration of civil small UAS.  The NPRM lists the following examples of possible small UAS operations that could be conducted under the FAA's proposed framework:

The NPRM notes that small UAS operations risk considerations differ from those associated with manned-aircraft operations.  Certain operations of small UAS have the potential to pose significantly less risk to persons and property than comparable operations of a manned aircraft, as the UAS is significantly lighter than a manned aircraft.  However, the unmanned nature of the small UAS operations raises two unique safety concerns:  (1) whether the person operating the small UAS, who would be physically separated from that aircraft during flight, would have the ability to see manned aircraft in time to prevent a mid-air collision with another aircraft; and (2) the possibility that, during flight, the person operating the small UAS may become unable to use the small UAS control interface due to a failure of the control link between the aircraft and the operator's control station.

The FAA chartered the small UAS Aviation Rulemaking Committee (ARC) on April 10, 2008 to address the safety and regulatory issues associated with small UAS.  On April 1, 2009, the ARC provided recommendations to the FAA regarding how to safely integrate small UAS into the NAS.  In 2013, the U.S. Department of Transportation issued a comprehensive plan and subsequently the FAA issued a roadmap of its efforts to achieve safe integration of UAS operations into the NAS.  In 2012, Congress passed the FAA Modernization and Reform Act of 2012 (Public Law 112-95).  Congress directed the Secretary of Transportation to issue a final rule on small UAS that will allow for civil operations of such systems in the NAS.  Congress also directed the Secretary to determine whether "certain unmanned aircraft systems may operate safely in the national airspace system."

To further facilitate integration of UAS into the NAS, the FAA selected six test sites to test UAS technology and operations.  In addition, the FAA is in the process of selecting a UAS Center of Excellence, which will also serve as another resource for these activities.  The NPRM seeks comments on how it can encourage innovation, safe development, and UAS integration into the NAS via its test site program.

For additional details about the NPRM, including a discussion of the proposal, please click here.